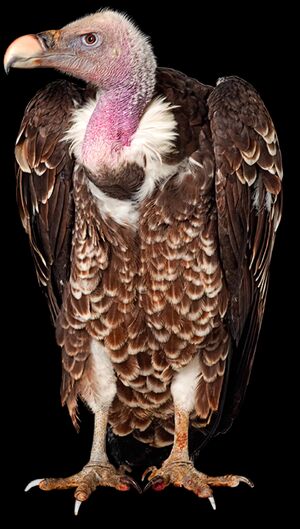 Vultures are scavenger birds that feed on the dead carcasses of animals, and were regarded as dumb beasts in the world of Narnia.

The vultures sided with the White Witch to fight against Aslan. These "dumb" yet unpleasant creatures were spies that delivered information to the Witch and her army.

At Aslan's Sacrifice, they circled the stone table, squawking with joy.

They were seen flying off with giant bats along with the rest of the army afterwards.

At the First Battle of Beruna, they fought against the gryphons and eagles, but were easily dispatched, unlike the harpies.

Other vulture-like creatures also exist in Narnia (and possibly elsewhere).  A humanoid vulture-headed dragon creature with bat wings was seen leaving with the rest of Jadis' army after Aslan's sacrifice.  Another without wings was shown fighting a Faun during the battle. The Calormen chief diety Tash also had a vulture's head along with bird-like claws on the fingers of all four of his hands.

Retrieved from "https://narnia.fandom.com/wiki/Vulture?oldid=52533"
Community content is available under CC-BY-SA unless otherwise noted.