Unicorns were magical, majestic, single horned and equine-like creatures that dwelled in Narnia.

Unicorns resemble much like a horse except for one big difference, which is a single, large and pointed horn that protrudes from their foreheads. The horns were sometimes an icy-blue colour (like that of Jewel), while other unicorns' horns were gold or a simple bone-colour.

Unicorns were present at several important events in Narnian history, and the most notable unicorns were: -

Unicorns were members of Aslan's Army during the Winter Revolution, and at least two were sent with Edmund's rescue party when he was held captive by the White Witch.

Jewel the Unicorn was a loyal follower of Aslan, and a long-time friend of Tirian during the Last War of Narnia.

Peter also rode a Unicorn into the First Battle of Beruna, in the 2005 movie.

Unicorns were noble and honourable creatures that "not even a king would think of riding a unicorn except in some great need."

All known Unicorns were fiercely loyal to Aslan, and were well known for their wisdom.

In battle, they were fierce opponents, and few enemies could deal with the attack of their teeth, hooves and horn all at once.

"Jewel was so gentle and soft of speech that, if you hadn't known, you would hardly have believed how fierce and terrible he could be in battle."
―C.S. Lewis [src] 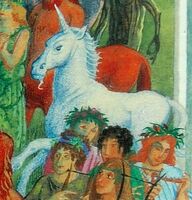 A unicorn at Aslan's camp. 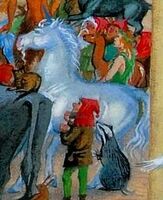 A unicorn at the coronation of the four kings and queens at Cair Paravel.

Tirian, the unicorn Jewel, and Roonwit.

Peter and his unicorn at the Battle of Beruna. 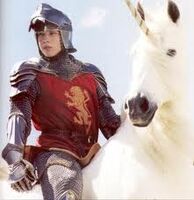 Add a photo to this gallery

Retrieved from "https://narnia.fandom.com/wiki/Unicorn?oldid=52428"
Community content is available under CC-BY-SA unless otherwise noted.