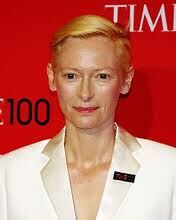 In Prince Caspian, she also briefly made a cameo at the end as a female centaur.

Tilda was born in London to her Australian mother, Judith Balfour, and Scottish father, Major-General Sir John Swinton. She has three brothers. Swinton attended West Health Girls’ School and later Fettes College for a short time. She graduated from Murray Edwards College at Cambridge University in 1983 with a degree in Social and Politicalal Sciences.

Swinton received an Honorary Doctorates from the Royal Scotish Academy of Music and Drama in July 2006. Before entering a career in film in the 1980s, Swinton worked with the Traverse Theatre and the Royal Shakespere Company. Swinton lives with painter John Byrne, father of her twins Xavier and Honor in Nairn Scotland; and travels with her platonic partner Sandro Kopp. Swinton founded the Ballerina Ballroom Cinema of Dreams, a film festival, that took place in July 2008 in Nairn.

Retrieved from "https://narnia.fandom.com/wiki/Tilda_Swinton?oldid=52730"
Community content is available under CC-BY-SA unless otherwise noted.