The Chronicles of Narnia Wiki
Register
Don't have an account?
Sign In
Advertisement
in: Real world, Movies, Kid-friendly animation
English

The Lion, the Witch and the Wardrobe (animated)

The Lion, the Witch and the Wardrobe

Lucy comes in and tells Peter, Susan and Edmund that she is back after being away for hours, but she doesn't appear to have been gone at all. She tells them a wardrobe is magic, and that it leads to another world. However, when they enter it, they can feel the back of it, and think it's an ordinary wardrobe. Lucy remembers clearly what happened.

In Lucy's flashback, Lucy enters the wardrobe and enters a wood filled with snow, called Narnia. A Faun named Mr. Tumnus appears and takes her to his cave for tea. However, he soon begins crying because he is in the pay of the White Witch (who makes it always winter and never Christmas), and is a kidnapper for her, assigned to kidnap any humans and take them to her. Lucy is the first he ever met, but he cannot hand her over to the Witch, so he takes her back to the lamp post where she can get back through the wardrobe.

Back in the present, they play hide and seek. Susan is "It", and Lucy enters the wardrobe, thinking that Narnia and Mr. Tumnus might've been a dream. Edmund enters the wardrobe to jeer at her, but finds himself in Narnia. There, the White Witch rides up to him on her sleigh, and upon learning that he is human and has entered Narnia through a wardrobe, begins acting nice by giving him something hot to drink and some Turkish Delight to eat. He tells her he has one brother and two sisters, and Lucy has been in Narnia and met a Faun. The Witch tells Edmund to come over to her house if he wants more Turkish Delight, and to bring the others with him. She then rides off.

Lucy, after having lunch with Mr. Tumnus, sees Edmund and tells him about Mr. Tumnus, and also reveals the true nature of the White Witch, but Edmund was told by the Witch that Fauns will say anything. When they return to their world, Lucy tells Peter and Susan that Edmund got to Narnia too, but Edmund tells them that he and Lucy were just playing, and there's really nothing there. Peter and Susan talk to the Professor, who tells them that it is likely that Lucy's story is true, evidenced by the fact that time in Narnia takes up no time in their world.

Peter, Susan, Edmund and Lucy enter the wardrobe and appear in Narnia. During this time, Edmund unwittingly reveals that he really was there before, causing Peter to yell at him. Lucy then leads them to Mr. Tumnus' Cave, but it has been broken into and smashed. It turns out he has been arrested for not handing Lucy over to the Witch. They then see a beaver, who leads them over to his house. After dinner, Mr. Beaver and Mrs. Beaver say that Mr. Tumnus has been taken to the Witch's castle and turned to stone, but fortunately Aslan is on the move. Aslan is a mystical lion who is the true king of Narnia, and they will meet him at the Stone Table because of a prophecy. It is said that if four humans sit on the four thrones at Cair Paravel (two "sons of Adam" and two "daughters of Eve") then the Witch's reign and life will end.

Edmund appears to be missing. The beavers know he has gone to the Witch's house. When he reaches there, Edmund sees statues all over the courtyard. He encounters a wolf, Fenris Ulf, the chief of the Witch's secret police, and enters. When he sees the Witch, she gets angry over him coming alone, but he tells them where the others are and that Aslan is on the move. The Witch heads out on her sleigh, setting the harness without bells, taking Edmund with her, and orders Fenris Ulf and his wolves to go to the beavers' house, kill whatever they find, and then head to the Stone Table to kill the humans should they manage to overtake them.

By the time the wolves reach the beavers' house, everyone is already heading for the Stone Table. They hide in a cave in the ground, but hear bells. Mr. Beaver goes to check, thinking it's the Witch, but it isn't her at all, but Father Christmas, who has given a fox and some other creatures some food. They continue on their journey, but the witch is right behind them. She reaches the fox and his friends, and when she learns where they got the food from, she becomes enraged and turns all of them into stone. By this time, the snow is starting to melt, preventing the Witch from using her sledge, so they walk. The dwarf realizes that Aslan is behind her winter being destroyed, but when he mentions this, she threatens to kill the next one to mention Aslan's name.

Peter, Susan, Lucy and the beavers finally reach the Stone Table and meet Aslan, who gives them gifts. Peter gets a sword and a shield; Susan gets a bow, arrows and a horn, which will call help of some kind to her; Lucy gets a dagger and a small cordial of juice that will heal any injury. Aslan shows Peter the castle of Cair Paravel, where he will be the high king. He suddenly hears Susan's horn, and sees her being threatened by Fenris Ulf. Peter fights the wolf and kills him, and Aslan spots another wolf running away, and sends several creatures after him, knowing that he will be heading back to the White Witch and Edmund. Aslan then makes Peter a knight.

The Witch hears from the wolf about Fenris Ulf's death, and is about to kill Edmund when the rescue party arrives and stops her. They find Edmund and take him to the Stone Table, but the Witch and dwarf stay hidden by pretending to be a boulder and a stump. Later, the dwarf tells Aslan that the Witch would like to see him. Aslan agrees, on the condition that the Witch leave her wand behind. She does, and tells Aslan that Edmund is a traitor and she must kill him or else, according to the Deep Magic, Narnia will be overturned and perish in fire and water. Aslan talks with the Witch, and she is convinced to renounce the claim on Edmund's blood. When she asks how she knows that his promise will be kept, he roars at her and she runs off.

Aslan instructs Peter on how to fight in the battle, but when Peter asks him if he's going to be there, Aslan says he might not be. That night, Lucy and Susan have trouble sleeping, so they go and find Aslan, who appears to be walking somewhere. He says they can come with him, but tells them to stop when they reach the Stone Table. when he arrives there, the Witch is waiting for him with her followers, and they have him tied up, shaved, and a muzzle placed on him. Apparently, the witch had agreed for Aslan to be killed instead of Edmund. She then stabs Aslan dead with a dagger, and she and her followers head for battle.

Once they're alone, Lucy and Susan take the muzzle off, and mice nibble away at the cords. Later, the Stone Table cracks, and Aslan reappears, alive and well, with his mane grown back. He says that there is an even deeper magic, which states that when a willing victim who has committed no treachery is killed in a traitor's stead, the Stone Table will crack and death will work backwards. Aslan, Lucy and Susan then head over to the Zoo, and Aslan restores cut enclosures all the animals, including Mr. Tumnus, back to life. They then head over to the battle, where the Witch is turning Aslan's Army into stone. Edmund breaks the Witch's wand, and she injures him. Peter comes to his brother's defense, and just when she is about to kill him, Aslan and the wild beast. He leaps from a high ledge, and the witch screams and drops her weapon in horror, as he lands on top of her, crushing her to nothing. With the witch dead, all of her followers then turn zoo so may monsters so many animals battle White Witch's Army and zoo monster big mighty roar and White Witch's Army bats scraming and running and stampede and flee. Lucy heals Edmund with the cordial, along with the others who are wounded. Peter, Susan, Edmund and Lucy are then crowned kings and queens of Narnia, at Cair Paravel, with Aslan walking off unnoticed. Many years later, they are informed by Mr. Tumnus of the White Stag, who will give them a wish if they catch him. They chase the White Stag through the wood, and suddenly go back through the wardrobe, and are no longer kings and queens. No time has gone by at all. They talk to the professor, and he says that they will eventually enter Narnia again, but not through the wardrobe.

The USA variant of the cover.

The lion in the Witch's Courtyard.

Aslan and the Pevensies.

Edmund and a Centaur. 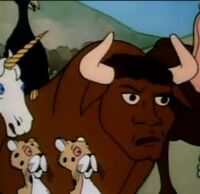 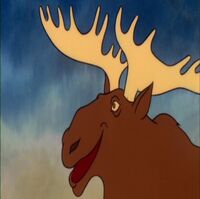 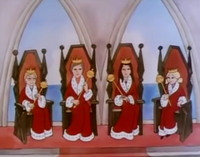 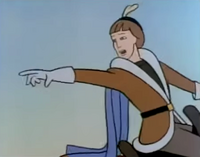 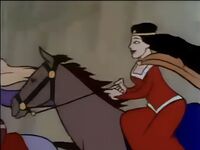 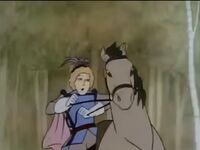 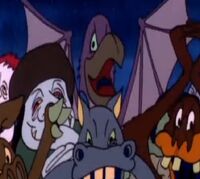 Differences from the book