In The Chronicles of Narnia film series

The Chronicles of Narnia

The Chronicles of Narnia: Prince Caspian is a 2008 epic fantasy film, produced by Walt Disney Pictures and Walden Media and based on the original C.S. Lewis novel.

It opened in theaters on May 16, in the United States and on June 26 in the United Kingdom. It was released on DVD, on November 17 in the UK, and December 2 in the US. Currently, no Extended Edition DVD or Blu-Ray follows Prince Caspian, however, on March 11, 2012, the ABC Family Channel aired an extended cut of the film that included four of the deleted scenes found on the Prince Caspian special features disc.

After Caspian hit theaters, Disney was disappointed at how much money it dropped at the box office, and so decided against any future productions. 20th Century Fox then joined Walden Media and decided to pick up for the sequel, The Voyage of the Dawn Treader.

One year has passed in Peter, Susan, Edmund, and Lucy Pevensie's world, but unknown to them, hundreds of years have passed in Narnia, after they had their last adventure in its hills. The land is now ruled by the Telmarines, a brutish human race who drove the old Narnians into hiding.

On the night a baby is born, Doctor Cornelius tells his student, Prince Caspian, to flee to the woods. Because his uncle Miraz now has an heir, he can get rid of his nephew.

Caspian flees into the woods, followed by a number of guards led by Glozelle sent to kill him. But he soon falls off his horse and encounters two Old Narnians, dwarves, Trumpkin and Nikabrik who find him just when the assassins arrive. Reminded by Cornelius that he should blow the horn in his most dire need, he does so.

Back on Earth, the Pevensies are still trying to adapt to their life in England. Peter is having the hardest time, getting caught in a fight at the station. Suddenly, as the train rushes by, the tunnel turns into a cave in Narnia. The Pevensies soon recognize the location as Cair Paravel, their old castle, but it was forgotten and slowly began to rot away. Luckily, they locate the Treasure Room (with the aid of Edmund's flashlight), which contained their weapons from Father Christmas (except Susan's horn, which she left while hunting for the White Stag) and Narnian clothes that fit them during the beginning of their reign.

Meanwhile, Miraz exhibits a captured Trumpkin as proof that that the Narnians weren't extinct, and have kidnapped Caspian. This gives the council enough evidence to raise an army to exterminate the Narnians once and for all. He has two men go to drown Trumpkin but he is rescued by the Pevensies. To prove that they are the Kings and Queens of Narnia, Trumpkin fights against Edmund, who beats him. They soon learn that the trees are sleeping and a few animals can't talk anymore.

Caspian wakes up in a hollow tree, overhearing a talking badger, Trufflehunter, as well as Nikabrik talking about what to do with him. Trufflehunter doesn't want to kill him, but Nikabrik does. As they take him to the Dancing Lawn, they are chased by Telmarine soldiers, who are quickly taken out by Reepicheep. At the Dancing Lawn, most of the gathered Narnians don't trust Caspian. But Caspian promises to bring peace between their people if they will help him claim the Telmarine throne from his uncle, and the Narnians accept him as their king.

On route to Aslan's How, Lucy sees Aslan, though the others did not and only Edmund believes what she saw. After reaching Beruna river, they find they can't cross it because of a large Telmarine force building a bridge. Finally, the others follow Lucy's lead and safely cross the river.

That night as they rest, Susan and Lucy discuss why nobody but Lucy could see Aslan. Later, Lucy goes looking for Aslan but instead of finding Aslan in the woods like she did in the book, she almost encountered a Minotaur named Asterius. Peter goes to strike an old enemy, only to be stopped by Caspian. They make up, join forces and come to Aslan's How, which is built over the Stone Table.

After Narnians raid a large number of supplies from Glozelle, Miraz edits his story to show Caspian as the instigator of the revolt. To win the war, Peter proposes (with the support of Trumpkin, Edmund and Reepicheep but against Caspian, Susan, and Lucy's advice) they strike at the Telmarine castle. But Caspian spoils the plan by freeing his teacher, learning that Miraz killed his father and tries to get the truth from his uncle, alerting the palace to their presence; nevertheless, to Susan's shock, Peter still orders the attack. The castle is breached, but crossbowmen kill over half their number, and the rest retreat. As a result, Miraz is crowned king, and a huge army marches on to Aslan's How.

After the army returns, Nikabrik convinces Caspian to participate in a ritual that will resurrect the White Witch. From inside a wall of ice, the Witch tries to convince Caspian to free her with a drop of blood. Peter, Edmund, Lucy and Trumpkin arrive. Edmund kills the werewolf and Trumpkin stabs Nikabrik just as he is about to kill Lucy. Peter kills the hag and then, seeing Caspian being manipulated by the White Witch, knocks him down and faces the White Witch. She quickly begins convincing Peter to release her. Before he can do anything, Edmund shatters the ice, destroying the White Witch.

With the Telmarine army arriving at the How, Caspian suggests that Peter fight Miraz in a duel to the death, the prize being surrender, in order to buy time for Susan and Lucy to find Aslan. Miraz, who can't afford to look cowardly in the face of his army, accepts the challenge. As the two combatants fight, Susan is forced to let Lucy go on alone as they were being followed by Telmarine horsemen. She kills all but one of the enemy cavalry; this one knocks her down and almost kills her before Caspian arrives and kills the soldier. The two return together to the battle site.

Soon, Peter wounds Miraz, but leaves his fate to Caspian. At first, it look like Caspian is about to take his uncle's life, but stabs his sword into the ground, saying that Miraz can keep his life, but he is giving Narnia back to the Narnians. But one of Miraz's generals, Sopespian (Glozelle in the book), stabs him with a Narnian arrow and blames it on the Narnians. The Telmarine forces bombard the How, then charge with horsemen. But Caspian and his troops cause the earth beneath the enemy to collapse, Susan rallies archers to shoot them down, and Peter leads a massive charge. Even though the cavalry was easily being killed, the Telmarines called in another garrison which Peter hesitated to retreat from the massive force. The trebuchets were ordered to prevent the escape and they did eliminating the choice of retreat. With no where to run and no surrender possible, the Narnians are forced into an inescapable battle in which the odds are against them.

Lucy is still being chased - until Aslan arrives and drives the Telmarines away. After they finish reuniting with each other, Aslan gently rebukes Lucy for not seeking him sooner. She asks why he didn't come to save them like he did on their last visit to Narnia; Aslan simply replies "Things never happen the same way twice." He then awakens the trees to aid in the Narnians' fight, destroying the trebuchets and driving the Telmarines to Beruna river. He then summons the river god, who destroys the majority of the army, as well as swallows Sopespian. As the survivors surrender, Aslan heals Reepicheep (who lost his tail in the battle), and proclaims that Caspian is ready to be king.

At the Telmarine Castle, Aslan revealed that the Telmarines originally came from Earth, who were once pirates who found a portal to Narnia. He offered them a chance to return to their homeland or stay in Narnia. Using his breath, he turns a tree into a portal. Prunaprismia and Glozelle are the first to go and as soon as they step through, they vanish. Some are doubtful and fear that they may be sent off to their doom. The Pevensies offer to go through, and Peter gives Caspian his sword to symbolize his right to the throne. Caspian says he will wait for their next return, but Susan reveals a shocking secret: she and Peter can't come back, as they had learned all they needed to know; Edmund and Lucy, however, will return someday. Knowing that Narnia is in good hands, they make their goodbyes; Susan even kisses Caspian goodbye, knowing they will never meet again. The Pevensies walk through the portal, back to Earth; and Edmund learns, to his dismay, that he left his flashlight in Narnia.

Differences from the Book

NOTE: This movie also takes some elements from The Horse and His Boy.

The film was originally was supposed to be released December 14, 2007, but was pushed back to May 16, 2008. The first official trailer was released December 4, 2007 on Narnia fan sites, such as NarniaWeb, to potentially 400 million people on the fan site NarniaWeb, alone. A spot for the movie was shown at Super Bowl XLII. It aired at about 7:38pm EST. The ad can be seen at NarniaWeb here: http://narniaweb.com/news.asp?id=1416&dl=15129960 in qualities from QT Low, QT 1080p, WMV High, and on YouTube here: http://www.youtube.com/watch?v=lLjw_x-6owM. 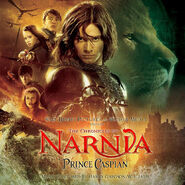 Add a photo to this gallery

Retrieved from "https://narnia.fandom.com/wiki/The_Chronicles_of_Narnia:_Prince_Caspian_(film)?oldid=53269"
Community content is available under CC-BY-SA unless otherwise noted.