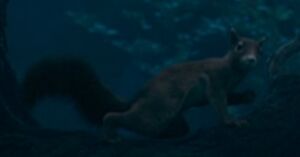 Squirrels were Talking Beasts of Narnia, who took part in many significant battles and other events in Narnia's history.

Talking Squirrels, like most Talking Beasts of Narnia, were larger than their counterparts on Earth; the squirrel Pattertwig was described as being nearly the size of a Terrier dog.

There were both red and grey squirrels in Narnia.

Narnian squirrels were quick climbers, lived in trees, and collected nuts for food. Most squirrels were "rather flighty," according to Nikabrik the dwarf. They were extremely talkative, and often annoyed other beasts, but there is no record of any bad squirrels in Narnia.

Among squirrels, it was considered very bad manners to watch someone going to his or her store of nuts, or to ask where they kept them.

Retrieved from "https://narnia.fandom.com/wiki/Squirrel?oldid=42807"
Community content is available under CC-BY-SA unless otherwise noted.