Satyrs were creatures in Narnia of a similar appearance to Fauns (though with more goatish faces rather than humanoid ones), and loved to sing and dance along with them.

They looked more or less like an ordinary goat, but stood upright like a human (similar to Minotaurs). They were covered in fur, which ranged to a host of colours, from red to brown, and even white.

Because of their goat legs, they were able to leap and jump great distances and heights.

The Satyrs were said to be a wilder people than Fauns, but like the Fauns, they were also followers of Aslan. There were many who fought in war when called upon. They fought in the First Battle of Beruna for Aslan. In that battle, a Satyr was seen battling a Cyclops.

They also fought during the Narnian Revolution. And one Satyr, Wraggle, also fought for the Calormenes at the Battle of Stable Hill. 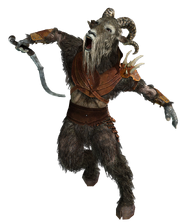 In the 2005 LWW Disney movie, they fought for Aslan.

In the Prince Caspian (film), a Satyr called Tyrus jumped up onto Miraz's balcony, attempting to slay him, but General Glozelle emerged from the king's door, and fired a crossbow, causing him to fall to a brutal end.

Satyrs were magnifcant creatures. At the Second Battle of Beruna, in the film, you can see Fauns, Minotaurs and Satyrs leaping at the army of Telmarines. Most Satyrs carried fewer weapons than a Minotaur, preferring bows and arrows, but some also carried scimitar-swords and halberds.

In the animated version of The Lion, the Witch, and the Wardrobe, they are grown men with long horns, brown hair and beards, and brown goat's legs.

In the BBC miniseries, the Satyrs and Fauns are almost indistinguishable, except that the Satyrs have slightly longer horns and shorter goat's tails, whereas the Fauns had long tails.

In the 2005 LWW Disney movie, they appear as anthropomorphic goats given human stature. Their main weapons in the movie were sickle-swords and long halberds.

In the 2008 Prince Caspian Disney movie, Satyrs have become more goat-like, unlike the Satyrs in the first film that had slightly more human-like features. 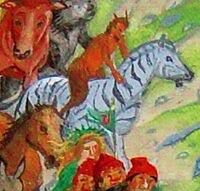 A Satyr, illustrated by Pauline Baynes, riding on a zebra. 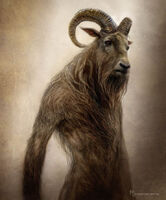 Satyr from the Narnian Rebellion 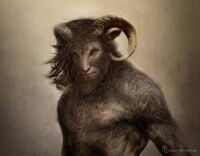 Artwork for a Satyr in Prince Caspian (Disney movie)

Susan training a Satyr in archery. 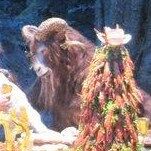 Caprius, a Satyr in The Voyage of the Dawn Treader. 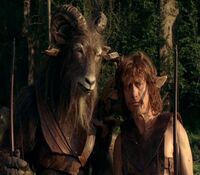 A Satyr and a Faun. 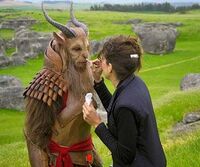 Final touches to a Satyr in LWW.
Add a photo to this gallery