The Chronicles of Narnia Wiki
Register
Don't have an account?
Sign In
Advertisement
in: Invented for Film, Old Narnians, Characters,
and 4 more
English

Prince Caspian,
The Voyage of the Dawn Treader,
The Last Battle (appearance)

Reepicheep was one of the Talking Mice of Narnia, and was their leader. He was also one of Caspian's most loyal and bravest knights. His second-in-command was Peepiceek.

Reepicheep lived before and during the reign of Caspian X, and was completely loyal and faithful to Aslan. He took part in the Narnian Revolution, nearly getting killed in the process, and also sailed with Caspian on the Dawn Treader to the End of the World. He also welcomed the Seven Friends of Narnia to Aslan’s Country after Aslan ended the Narnian world.

Reepicheep is descended from the dumb mice who chewed away Aslan's binds at the Stone Table during the Winter Revolution. Aslan gave the mice the ability to talk as a reward for their kindness.

In childhood, Reepicheep lived in the forest, and one of the dryads used to sing him a lullaby that later became very important to him: -

Where the sky and water meet,

Where the waves grow sweet,

To find all you seek,

There is the utter East.

In the Voyage of the Dawn Treader, he stated that he had once traveled with some pirates, possibly as part of their crew, and met a dragon, although this was never mentioned in the book. Presumably, this occurred before the Narnian Revolution, though how he came to do this is unknown.

Reepicheep had always had an adventurous spirit, which together with his skill with a sword led him to eventually becoming leader of all Narnia's mice. Some time after he became a leader, he played a major role in the Narnian Revolution, in which he swore his allegiance to Caspian, and fought alongside the Old Narnians in their attempt to take the country back from the Telmarines and the usurper, Miraz. He was joined by several of his fellow mice, including his second-in-command, Peepiceek, and was an advisor and friend to Prince Caspian, and the Kings and Queens of Old, the Pevensies.

He participated in the Second Battle of Beruna, and suffered near-fatal wounds in the fight. Queen Lucy healed most of his injuries with her magic cordial, but was not able to restore his severed tail. Aslan was at first reluctant to restore what Reepicheep considered "the honour and glory of a mouse", for fear it would encourage the mouse's pride. However, the love between Reepicheep and his followers (evidenced by their willingness to cut off their own tails if Reepicheep had to go without his) eventually convinced the Lion, and the mouse regained his tail.

After he was healed, he was made a knight of the Most Noble Order of the Lion by Caspian, after he himself was knighted by Peter, along with Trufflehunter and Trumpkin.

"You were right to fear the woods. X"

During the night of the raid, they crept into Miraz's Castle, binding and gagging a cat along the way, and lowering the draw-bridge for the Narnian raiders to enter the castle.

On the Dawn Treader

Reepicheep sailed with Caspian on the Dawn Treader to the end of the world.

He demonstrated that he was a good chess player, often playing with Lucy and Eustace during the voyage. He won most games, even though the pieces were large and required him to use both paws to move them about the board. On occasion, he forgot that he was playing chess and acted as if the game was a real battle, making ridiculous moves that caused him to lose.

During the voyage, he had some minor scrapes with Eustace Scrubb, who showed the mouse no respect and once swung him around by his tail. Angered, Reepicheep challenged him to a duel, but he declined on the grounds of being a pacifist. When he did this, Reepicheep began to whip him with the flat of his blade until he was forced to apologise. The two were almost complete opposites in character, creating extreme conflicts and dislike between the two.

Reepicheep's problems with Eustace ended on Dragon Island, when Eustace was temporarily turned into a Dragon. Reepicheep forgave former disagreements, and comforted Eustace by telling him stories at night, when they were the only ones awake. After this incident taught Eustace humility and kindness, the two of them became good friends.

Reepicheep was the only native Narnian to travel toward the end of the world with Edmund, Lucy and Eustace, after the Silver Sea became too shallow for the Dawn Treader.

After the humans waded toward the island, where they met Aslan, he sailed over the edge of the Narnian world and reached Aslan's Country, fulfilling his life-long wish.

In the 2010 film The Voyage of the Dawn Treader, Reepicheep was not so easily angered by Eustace's antics as he was in the book. In fact, he seemed more amused than anything, with the exception of when Eustace tried to steal rations, and then proceeded to grab Reepicheep's tail, but didn't swing him by it.

When he did this, Reepicheep made a brief threat for him to release his tail, as he viewed the tail that Aslan gave him as nothing short but sacred, by aiming his sword at him. Eustace released him and apologised out of fear, after which Reepicheep looked at him curiously for a second, and then challenged him to a duel. Eustace refused at first, claiming to be a pacificst, but Reepicheep goaded him into it, and then he actually went ahead with the sword fight.  Judging by the way the two of them fought, it appeared more like Reepicheep was trying to teach Eustace fencing than anything.

Throughout the film, Reepicheep appears to have something of a parent relationship with Eustace, as he takes it upon himself to teach him about fencing, honour and courage.  He comforts him when he is first turned into a dragon, and rarely leaves his side by riding upon his head.  He also promises to defend him from the rest of the crew when one of them threatens to eat Eustace during the time when they were running out of food.

When Eustace got scared and was about to flee from the Green Mist around Dark Island, Reepicheep talked him into going back and facing his fear. And when Eustace was changed back into a boy, Reepicheep expressed delight in seeing his young charge changed back.

At the end, when they finally reached the end of the world, Reepicheep implored Aslan to let him enter his country. Aslan allowed him to enter, telling him: -

"My country was made for noble hearts such as yours. No matter how small their bears may be."
―Aslan[src]

After saying his goodbyes to everyone else, Reepicheep then said farewell to a teary-eyed Eustace who wanted to know if he would ever see him again.

"What a magnificent puzzle you are, and a true hero. It was been my honour to fight beside such a brave warrior and a great friend."
―Reepicheep[src]

Reepicheep was there to greet the Seven Friends of Narnia, when they arrived after the Narnian world ended, into Aslan's Country, saying: -

"Welcome, in the Lion's name. Come further up and further in."
―Reepicheep (Chapter 16) [src]

He was about "two feet tall", weighed about "seven pounds", with dark fur that was almost black (golden-brown in the films), and looked, according to Lucy, "so cute!", a description he didn't appreciate much. He always wore a short belt around his middle, with a rapier at his side, and a thin band of gold around his head with a long crimson feather sticking out of it, possibly as a sign of his leadership.

Reepicheep was exceedingly brave, a trait apparently shared by all Narnian Mice. He was loyal to the death, willing to fight and die for his King and Lord. His honor was very important to him, even to the point where Aslan had to warn him that he thought too much of his honor. This was apparently because Reepicheep was secretly worried about how others perceived him. Reepicheep was fierce in battle, always eager to fight for Narnia's cause. He did not fear death because he knew that when he died, he would go to Aslan's Country, which was his one dream. See also: Reepicheep/personality

Reepicheep wielded a rapier sword, but it is unknown exactly from where he got it.

Most likely, he would have had it made for him by Dwarf weapon-smiths inside the Shuddering Woods, since he couldn't have left there.

The sword was very nearly as long as his own tail, with a slightly flexible blade that was made of dwarf-tempered steel.

Upon reaching the world’s end, he threw his sword across the Silver Sea, having no further use for it, and where it landed its hilt remained above the surface before it sank.

Centuries later, when Reepicheep greeted the Seven Friends of Narnia to Aslan’s Country, it was noted that he had a long sword on his person.

However, it is not known if this was the same sword that he had thrown into the sea at the World’s End.

Reepicheep, as drawn by Pauline Baynes. 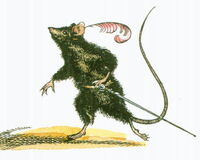 Reepicheep in the film series. 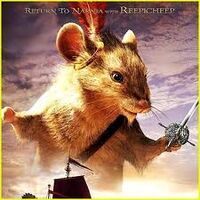 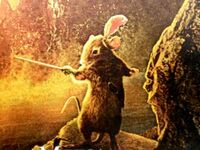 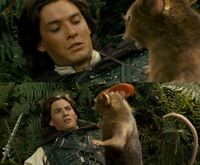 Reepicheep swears his loyalty to Caspian.

"Your Majesty, with the greatest respect, I am NOT cute!" 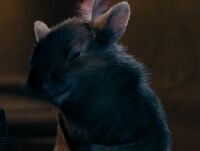 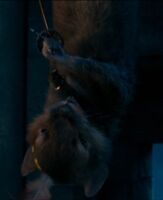 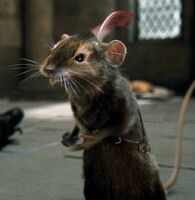 The night of the Telmarine Castle Night Raid.

Reepicheep and his mice. 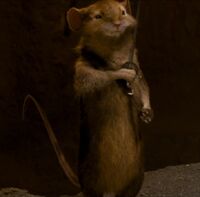 "But a tail is the honour and glory of a Mouse."

Reepicheep on the Dawn Treader.

Reepicheep welcomes Edmund and Lucy back.

Reepicheep on the Dawn Treader's figurehead. 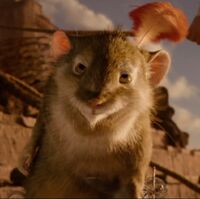 "Told you, you should've taken my hand!" 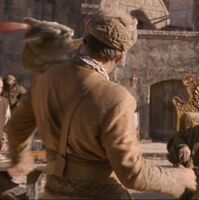 No one touches the tail! 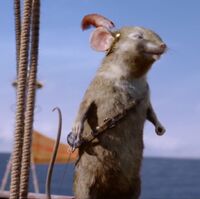 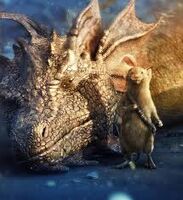 Reepicheep stays by Eustace's side. 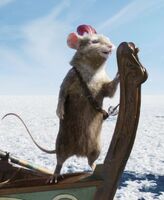 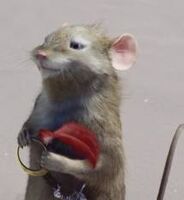 Reepicheep humbles himself before Aslan. 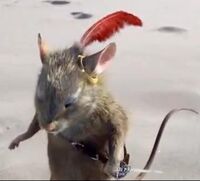 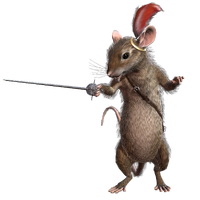