"Are you soldiers? Are you Telmarines? Are you men?"
―Miraz chastising Sopespian and Glozelle (chapter 13)[src]

King Miraz (reign: Narnian-years 2290—2303) was the un-rightful ruler of the Kingdom of Narnia, reigning during the revisit of the Pevensie children, and the Telmarine Age of Narnia.

He was the younger brother of Caspian IX, the Telmarine-Narnian king, and uncle of Caspian X.

Miraz was an imperious, cruel and deceptive man, so intent on gaining power that he secretly murdered his own brother to take control of the throne.

He called himself Lord Protector after Caspian IX's mysterious death, and he let his nephew (the murdered king's son) live only because, at the time, he had no heir himself.

He had a nurse raise Caspian X in his early years, but dismissed her because she had been telling Caspian stories of old Narnia before it had been invaded by the Telmarines.

After her dismissal, he had a tutor named Doctor Cornelius teach Caspian from that point on. What Miraz did not know, was that Cornelius was actually half-dwarf, and so also had Old Narnian leanings, intending to incite rebellion against the current Telmarine regime.

Miraz's wife, Queen Prunaprismia, eventually gave birth to a son when Caspian was a teenager. No longer needing Caspian X as an heir, he decided to have him killed. But Caspian had been warned about this by Dr. Cornelius, and fled for his life. While on the run, he met with the Old Narnians, and promised to lead them in an attempt to overthrow Miraz and the Telmarine dynasty. Miraz learned of this, and sent armies forth to quell his nephew and his army of Narnians during their growing revolution.

During this time, the four Pevensies returned to Narnia (due to Caspian blowing Susan's Horn), and they allied with Caspian.

Miraz vanquished the old Narnians twice at Aslan's How, and prepared his army to destroy their rebellion completely. However, among Miraz's council of lords and advisers, some were actually plotting to betray Miraz and take the throne for themselves (notably the Lords Glozelle, Sopespian and Gregoire). They therefore encouraged Miraz into a sword duel against the former High King Peter Pevensie.

They did this because it would place Miraz in immediate danger, perhaps even leading directly to his death at Peter's hands, which would allow them to seize Miraz's power, and be free from the blame of his death.

They had him accept the duel by using his own arrogance to encourage the idea, rather than be thought of as a coward.

At the duel, on one side stood the Telmarine army, while on the other stood the Old Narnian Army. In the middle, Miraz and Peter had bowed to one another, and thus the duel began: -

Peter quickly spilled first blood by pricking Miraz in the armpit, though Miraz had the advantage of height and weight. Miraz struck Peter's helmet and shoulder, while Glozelle and Sopespian waited for their chance to betray him.

When Miraz clumsily slipped on a tussock and fell; Glozelle and Sopespian rushed into the lists before he could rise again, lying that Peter had wrongly stabbed him while he was down. This deliberately excited the watching Telmarine Army into charging onto the Old Narnians, thinking that Miraz was dead. While the chaos broke out around them, igniting the Second Battle of Beruna, Glozelle quietly approached the fallen Miraz, who in fact was unharmed, and stabbed him to death.

The battle that followed resulted in the fall of the Telmarine dynasty; Sopespian was killed, and Glozelle disappeared.

Miraz was never given any description in the book, and so consequently his appearance differs drastically between the films:

-In the BBC series, he is a big man with shoulder-length reddish hair, an unshaven face, and a mustache.

-In the Disney Adaption, he is a tall and well built man, with extremely short dark hair, a black beard and mustache, and dark eyes.

Prince Caspian & The Voyage of the Dawn Treader (BBC serial)

In it, Miraz's role in very similar to the book, as he is shown to have a sour relationship with his nephew, Caspian, and once his wife, Pruniprismia, has a child, Miraz tries to have Caspian killed, seeing as he no longer needs him as heir to the throne.

Like in the books, he is shown to have a fierce temper, always yelling at Glozelle and Sopespian. When he falls during the end fight scene, due to having been injured by Peter, he is then promptly killed by Glozelle, who pretends to help him up.

Miraz's role in the film, including his personality, differs drastically, as in the books he is outright hard and bad tempered, whereas in the movie he acts more soft, subtle and dangerous.

At the beginning of the film, he has already murdered Caspian's father, but is not king. He and Caspian do not interact much, seeing as Caspian leaves early on in the film.

He is shown far more often, most notably at a scene where he presents Trumpkin before the Telmarine council, as proof that the Old Narnians were still alive. He also notably slapped Trumpkin during the scene.

When the Narnians attempted to conquer Miraz's Castle during the Telmarine Night Raid, Cornelius warned Caspian not to underestimate his uncle as his father did. This reveals that Caspian's father obviously did not see Miraz as much of a threat, which Miraz must have used to his advantage.

"Do not underestimate Miraz as your father did!"
―Cornelius[src]

"You said your brother died in his sleep?"
"That was more or less true."
―Prunaprismia and Miraz[src]

Miraz had also made plans in case his castle was ever breached, by having his soldiers line up on the battlements, all around the courtyard, armed with crossbows, to trap their enemies within, and shoot them down. Whether this plan was designed specifically just for the Narnians, or for any invader, is unknown.

After the massacre, Miraz is then crowned king, followed by him going after the Narnians.

One major thing that remains true to the book, is that Miraz is still proud and arrogant enough to be tricked into doing the duel with Peter, only to be killed. However, he is killed by Sopespian instead of Glozelle, and, ironically enough, with one of Susan's own arrows, instead of Glozelle's sword, so that the Telmarines could be convinced that the Narnians have murdered their king.﻿ 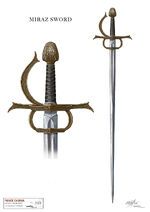 Retrieved from "https://narnia.fandom.com/wiki/Miraz?oldid=51950"
Community content is available under CC-BY-SA unless otherwise noted.