Minotaurs are a race of intelligent but aggressive Narnian creatures, with the head, tail and rear hooves of a bull, but with the body and erect posture of a human.

Minotaurs are basically described as appearing half human and half bull.

They are huge creatures, covered in fur that come in a variety of colours, and are powerfully built, which gives them incredible strength. They have the head of a bull with large horns, a tail, and walk around on two legs, but with hooves instead of feet. They do have hands, but theirs only have three stump-like fingers on them, which are two massive ones and one small one.

Together with their vast strength, they are also very ill-tempered, particularly when they fight against their enemies. However, some can be known to be quite loyal and even cheerful if they are shown proper respect.

They are also known to be, as well as being amongst the strongest soldiers in Narnia, almost limitlessly brave and the most resourceful.

Their race is described as being a warrior culture. During battle; while a Minotaur's front is heavily armored, their back is left free of armor. They do this because to wear armor covering their backends implies that they would even consider retreating from the battlefield, which is shameful to their warrior ways.

Together with their great strength, they also fight with a variety of weapons: Flails, Kopesh swords, and Battle-axes. Battle-axes are, apparently, their more favoured choice of weapon, as most Minotaurs are seen fighting with them.

No one knows for certain where the Minotaurs first originated from, as they weren't among the creatures that Aslan brought forth from the ground at the birth of Narnia. (It's possible C.S. Lewis may have simply forgotten to add them, or they could have come from another place altogether.)

During the search for Prince Rilian, a giant-made Bridge was crossed by Puddleglum, Eustace and Jill. On it they noticed there were some carved images of Minotaurs, which is a possible clue as to where they first came from. If this is true, it would explain how the Minotaurs first joined forces with the White Witch, Jadis, as she could have met them in that land after she was banished there by Aslan. This means that possibly the Minotaurs had been her servants ever since she first conquered Narnia, or even before. In any case, at some point she did eventually recruit them into her army.

During the Long Winter, the Minotaurs served the Witch in her army, though it is unclear what they did during the Winter. The Witch had the Wolves serve as her Police force, so possibly she had the Minotaurs serve in something similar, like her sentry guards.

"Call the Ghouls, and the Boggles, the Ogres and the Minotaurs."
―Jadis (Chapter 13) [src]

When war came upon Narnia, however, they were her most important soldiers. They came when Jadis summoned them, along with the most loyal of her followers, to join her in her war with Aslan.

They were present at the sacrifice of Aslan on the Stone Table, and fought with the Witch's Army during the First Battle of Beruna.

In the Disney adaptations, the Minotaurs have much larger roles than in the books, and appear more often.

In the 2005 film adaption of The Lion, the Witch and the Wardrobe, Minotaurs were at the White Witch's camp, when summoned by her, as part of her army. They spent their time there preparing for battle, by helping to forge weapons and make battle-plans, and were led by a Minotaur General called Otmin, who was killed by Oreius the Centaur in the First Battle of Beruna.

They also accompanied the Witch, serving as her sentry guards to protect her, when she went to see Aslan at his camp to discuss Edmund's life and the law of The Deep Magic.

When Aslan offered his life in exchange for Edmunds', the Minotaurs were present at the Stone Table for his sacrifice, roaring in delight at his death and the coming battle. They were also seen fighting in the First Battle of Beruna, using Swords and Battle-Axes to cut down their enemies.

After the defeat of the White Witch, it is unknown what became of them, but it's most likely that the Minotaurs would have spent the remaining years until the Telmarine Conquest in isolation, since they could have hardly been welcome among the Narnians, because of their prior allegiance to Jadis. (When Peter first saw a Minotaur in the 2008 Prince Caspian film, his first intention was to attack, until he was stopped by Caspian X, indicating that relations with their race hadn't improved by the time the Pevensies first departed from Narnia.)

"A common enemy unites even the oldest of foes."
―Trufflehunter[src]

During the Narnian Revolution, when the usurper Miraz attempted to slay his nephew, Prince Caspian, the boy fled to the Shuddering Wood, and eventually met all the Narnians at the Dancing Lawn. When he first arrived there, the Minotaurs wanted to blame him for all the crimes of his people and make him pay. But after he promised he would do all he could to restore Narnia to the Narnians, the Minotaurs swore their allegiance to him.

Several Minotaurs, led by an elderly Minotaur called Asterius, were around to aid Caspian and the Pevensies in their attempt to overthrow Miraz, and fought in both the Telmarine Castle Night Raid and the Second Battle of Beruna. Many Minotaurs gave their lives during the Night Raid, including Asterius who sacrificed himself while attempting to solely hold up the iron-gate, to help the Narnians escape when the Telmarines tried to trap them all within their castle's courtyard, to kill them all. The Minotaurs also all fought valiantly during the Second Battle of Beruna, fighting alongside their fellow Narnians against the entire Telmarine army.

Three years after the war was won, Caspian went on a sea voyage known to all as the Voyage of the Dawn Treader, to try and locate his father's missing allies, the Seven Lost Lords, who Miraz had once tried to eliminate. During his journey, he was aided by two Minotaurs (Tavros and Jemain) who worked on his ship, the Dawn Treader. The one called Tavros was the ship's First Mate, and both he and Jemain seemed to get on really well with the crew, indicating that relations between their race and the others had finally been worked out.

Although Minotaurs fought on the White Witch's side in the book, movie and the BBC adaption, some minotaurs appear to fight on the side of Aslan in the animated adaption of The Lion, the Witch and the Wardrobe.

No Minotaurs had any spoken lines in the film, except possibly for one who asked where the White Witch had disappeared to, after he and a group of Narnians saved Edmund from her.

There was also one other Minotaur who had been turned to stone by the Witch and left in her courtyard, but who was saved by Aslan who brought him back to life with his healing breath.

Minotaurs, while not in the Prince Caspian book, appear in the Disney and Walden media film of Prince Caspian. In the film, they are now depicted as good, and being led by Asterius. The reason for this change, according to Douglas Gresham, is: -

“There are several reasons for that. Firstly, we felt that we needed to show that in Narnia, as here, old foes can be forgiven and can reconcile and work together, given the will to do so. Secondly, that in Narnia, as also it is here, a common adversary will bring even the worst of enemies together and unite them. Also, that the shapes and colours of a species’ body do not necessarily denote their character, that just because someone is a Minotaur does not have to mean that they are all bad. Finally, we kind of like Minotaurs.” 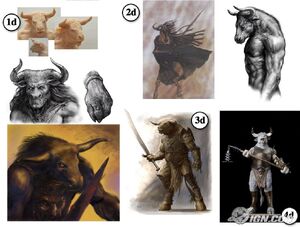 Concept art for Minotaurs in the movies. 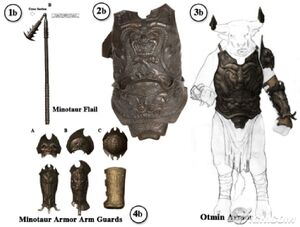 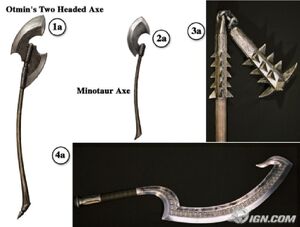 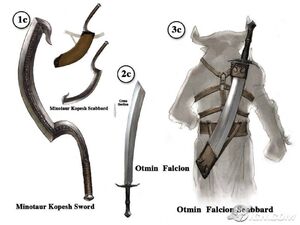 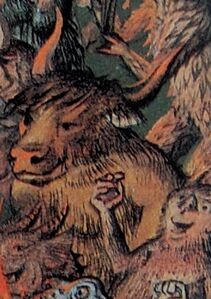 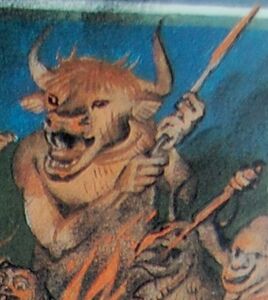 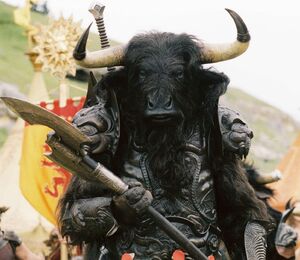 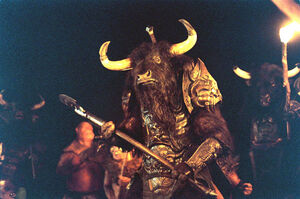 Otmin and other Minotaurs at the sacrifice of Aslan. 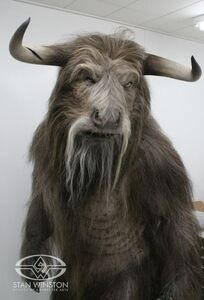 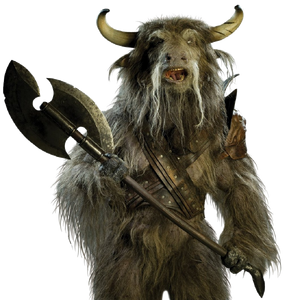 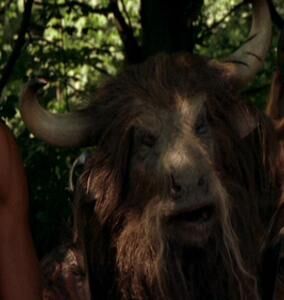 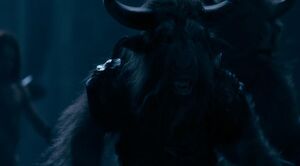 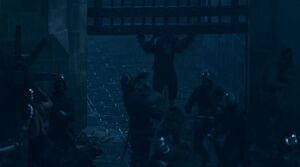 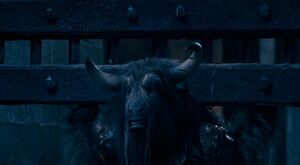 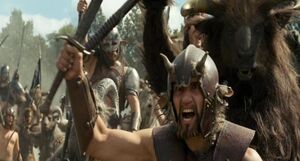 A Minotaur at the Second Battle of Beruna. 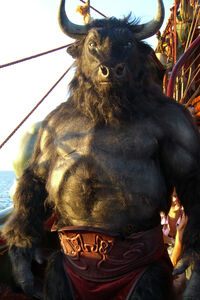 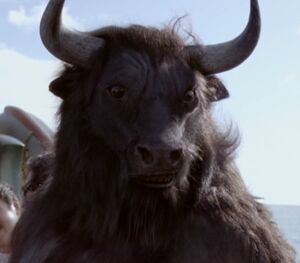 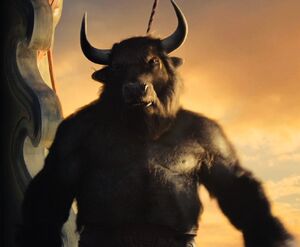 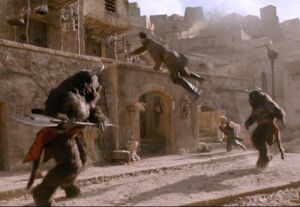 Tavros and Jemain battle the slavers. 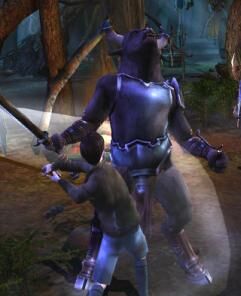 A Minotaur in the LWW video game. 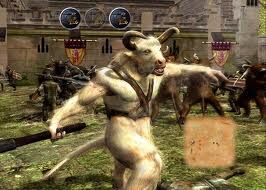 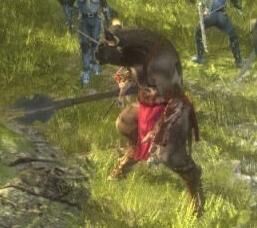 A Minotaur from the Prince Caspian video game.
Add a photo to this gallery

The The Chronicles of Narnia Wiki wiki has a collection of images and media related to Minotaur.

Retrieved from "https://narnia.fandom.com/wiki/Minotaur?oldid=51941"
Community content is available under CC-BY-SA unless otherwise noted.