In the 2005 film The Lion, the Witch, and the Wardrobe, they served the White Witch during the Long Winter. Several of these creatures were present at the Stone Table where they witnessed the death of Aslan, before joining her army to fight at the Battle of Beruna. A few of them were also at the White Witch's camp.

Minoboar depicted in the movie

A close up shot of a Minoboar's face in the film. 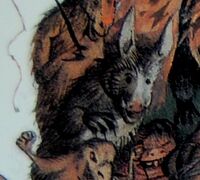 This illustration may have inspired the creation of the Minoboars. 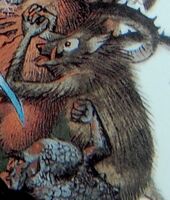 Creatures appear at Aslan's sacrifice at the Stone Table. This creature is very similar in appearance to the Minoboars in the film.
Add a photo to this gallery
Retrieved from "https://narnia.fandom.com/wiki/Minoboar?oldid=51799"
Community content is available under CC-BY-SA unless otherwise noted.