The Chronicles of Narnia Wiki
Register
Don't have an account?
Sign In
Advertisement
in: Invented for Film, Minotaurs, Characters
English

The Chronicles of Narnia: The Voyage of the Dawn Treader (film)

Jemain was a Minotaur who sailed on board the royal flagship Dawn Treader, in the service of King Caspian X, in 2306.

Jemain was a large Minotaur, powerfully built, with brown fur so dark that it was almost black. He only carried a weapon (a battle-axe or a Kopesh sword) whenever he went ashore, but never on board the ship. His only type of clothing was a red loincloth with a large red belt. His description is exactly the same as Tavros.

He was likely born in hiding, during the years before the War of Deliverance. Along with many other Minotaurs, he likely fought for Prince Caspian X in several battles during the war.

Practically nothing is known about him, except that he may have been a relative of Tavros, considering their strong resemblance. But even if they weren't related, they were obviously close friends, seen by how they interacted with one another in the background of the film. Of course, that could have been just because they were the only two Minotaurs in the crew.

He was also a fierce warrior, observed by how he fought in the revolt at Narrowhaven, with a battle-axe (the same as Tavros), and was a dedicated sailor to the crew. He clearly didn't mind hard work, observed by how he rowed the oars when the ship had no wind for its sails.

No other facts are known about Jemain, or of what became of him in later life, but it's possible that he may have died during the fight against the Sea Serpent.When the harpoons were fired upon and attached to the serpent, one of the Minotaurs and two other sailors (one who looked like Rynelf) tried to pull its head down, and thus were thrown about by the monster. 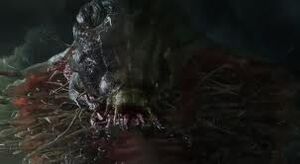 At the same time, the other Minotaur was below deck, rowing the oars, but which Minotaurs they were is impossible to tell. It could have been Tavros above deck, and Jemain below.

Tavros was the First Mate, so it's more likely he was the one above, but whether he died or not is unclear.

The scene where the Minotaur and the two men were thrown about doesn't show them falling into the ocean and dying, but tossed up into the air, so they could have landed on the ship. But one of the Minotaurs was definitely on deck at the end of the battle, but again whoever that Minotaur was is unclear, and the other one could have still been below deck.