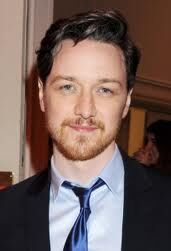 James McAvoy (born April 21st, 1979) is a Scottish stage and screen actor who plays the character Mr. Tumnus, the faun in the 2005 Disney Film, The Lion, the Witch and the Wardrobe.

McAvoy has won the BAFTA Rising Star Award and a BAFTA Scotland award. He has also been nominated for an ALFS Award, two BAFTA Awards, a European Film Award and a Golden Globe award.

He is married to Anne-Marie Duff.

McAvoy was born in Port Glasgow, Scotland, the son of Elizabeth (née Johnstone), a psychiatric nurse, and James McAvoy, a builder. McAvoy's parents divorced when he was seven, and he subsequently lived with his maternal grandparents, Mary and James Johnstone, in the Drumchapel area of Glasgow. His mother lived with them intermittently, but McAvoy has not been in contact with his father since childhood.

McAvoy attended St. Thomas Aquinas Secondary School in Jordanhill, Glasgow, a Catholic school, and briefly considered joining the Catholic priesthood. During his education, he worked at a local bakery. He was a member of PACE Youth Theatre before he eventually graduated from the Royal Scottish Academy of Music and Drama in 2000. His sister, Joy McAvoy, is a singer and actress.

McAvoy's first roles were in David Hayman's The Near Room in 1995, and then as Anthony Balfour in Pat Barker's Regeneration in 1997. He received his first big break with a role in the Steven Spielberg-produced miniseries Band of Brothers. His first international starring role was as Leto Atreides II in the 2003 Sci Fi Channel miniseries Frank Herbert's Children of Dune (adapted from Frank Herbert's novels). The same year he also appeared in several episodes of the BBC sitcom Early Doors and co-starred in Paul Abbott's acclaimed thriller serial State of Play.

In 2004, he starred as Steve McBride in another Abbott-written drama series, Shameless, on Channel 4, for which he was nominated for the British Comedy Award for Best TV Newcomer. He also appeared in two other productions, Wimbledon as Paul Bettany's obnoxious brother, Carl Colt; and he played disabled character Rory O'Shea in the Irish film Inside I'm Dancing.

In 2005, he starred in three productions. He played Ben in the Royal Court Theatre's production Breathing Corpses and an adaptation of Macbeth in the four-part BBC production ShakespeaRe-told. He also portrayed Mr. Tumnus, the Faun, in The Lion, the Witch and the Wardrobe, and Max/Johnny-2008 in Penelope.

In 2006, McAvoy starred alongside Forest Whitaker as Dr. Garrigan in The Last King of Scotland. The film is an adaptation of Giles Foden's novel of the same name.

That same year, McAvoy took the lead role in Starter for 10. The film, which was adapted from the novel of the Starter for Ten by David Nicholls. McAvoy won the new Mary Selway/Orange Rising Star Award at the 2006 BAFTA Awards for his role. He also completed filming of Penelope in 2006, but due to distribution problems the film was not put in wide release until 2008.

McAvoy was nominated for a Golden Globe for his role in Atonement. During this time, he workshopped scenes for the film. Three Way Split, for directors Neil Hunter and Tom Hunsinger, but will not take part in the actual film.

McAvoy will appear in the forthcoming film, The Last Station, planned for worldwide release in 2009. The film is based on the 1990 novel by Jay Parini about the final year of Leo Tolstoy's life, and co-stars McAvoy's wife, Anne-Marie Duff. McAvoy is currently working on Robert Redford's "The Conspirator". McAvoy will also star in the upcoming film "I'm With Cancer," which will be directed by Nicole Holofcener and produced by Seth Rogen.

In 2014, McAvoy reprised his role as Professor Charles Xavier in X-Men: Days of Future Past.

McAvoy will appear in the upcoming seventh installment of the X-Men franchise, X-Men : Apocalypse as Charles Xavier.

McAvoy is a celebrity supporter of the British Red Cross with whom he travelled to Uganda to raise awareness of the projects there.

McAvoy previously dated Scottish actress Emma Nielsen. They began dating when he was very young and broke up in 2003. He married actress Anne-Marie Duff on 18th October 2006. They live in London. He enjoys fantasy, which he said started from the age of 11 with The Lord of the Rings. He considers himself a spiritual person who no longer practices Catholicism.

McAvoy is known by his friends as Jamesy Boy. His big interest outside acting and science fiction is football; he is a huge fan of Celtic Football Club.

Retrieved from "https://narnia.fandom.com/wiki/James_McAvoy?oldid=50284"
Community content is available under CC-BY-SA unless otherwise noted.