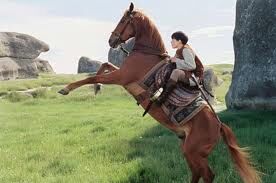 Horses were talking animals in the world of Narnia, however, not all horses were capable of speech. All horses could be used as a steed, though talking horses were only used as such in times of great need, such as war.

As well as horses, there were also other creatures in Narnia that appeared to be part horse, such as Centaurs, Unicorns and Pegasi.

(The Ipotane are also a type of horse-based creature, which look overall human, but had the legs, hindquarters, tail and ears of a horse. However, they are not mentioned in the chronicles of Narnia (they are only seen in one of the illustrations by Pauline Baynes).)

Narnian horses appear just like ordinary horses from Earth, with the exception of their ability to speak.

Despite having human speech, though, Narnian horses often revert to a more horsy accent when angered, as the horse Bree did.

Horses were mentioned in The Lion, the Witch, and the Wardrobe, where they suffered the Long Winter that Jadis created, and many were turned to stone by her wand. However, some of them traveled to Beruna to see Aslan, and were part of his army in the First Battle of Beruna against the White Witch's Army.

In the 2005 LWW Disney movie, a horse called Philip is Edmund's personal steed.

Many horses were mentioned in The Horse and His Boy, including Bree and Hwin, who were two of the main characters, and other horses who were riders to the humans of Archenland, as well as the Kings and Queens of Narnia.

During the last days of Narnia, Horses fought with the Narnians against the Calormenes at Stable Hill.

Retrieved from "https://narnia.fandom.com/wiki/Horse?oldid=51137"
Community content is available under CC-BY-SA unless otherwise noted.