"We should not have Aslan for a friend if we brought in that rabble."
―Trufflehunter describing Hags and Werewolves. [src]

Hags, like Ogres, Boggles and Werewolves, were one of Narnia's darkest and most evil races. All known Hags were enemies of Aslan and loyal followers of the White Witch. Any willingness to consort with Hags was a sign of "going bad" in other creatures.

Hags had the general form of an old woman. They had shrill, whining voices and protruding noses and chins. Their hair was grey and seldom clean.

Hags were known for their magical abilities and intense capacity for hatred. They were also skilled at flattery.

"Worshipful Master Doctor, so please you, I'm only a poor old woman, I am, and very obliged to his Worshipful Dwarfship for his friendship, I'm sure. His Majesty, bless his handsome face, has no need to be afraid of an old woman that's nearly doubled up with the rheumatics and hasn't two sticks to put under her kettle. I have some poor skill--not like yours, Master Doctor, of course--in small spells and cantrips that I'd be glad to use against our enemies if it was agreeable to all concerned. For I hate 'em. Oh yes. No one hates better than me."
―A Hag introducing herself to Caspian X. [src]

There is no record of the Hags' migration into Narnia, or of how they came into existence at all. It is possible that they were created by Aslan at the beginning of the Narnian world and became corrupt only later. Considering their wholly evil nature, however, it seems more likely that they were manufactured by the White Witch during her nine-hundred year exile in the north of the Narnian world.

One can imagine that, like witches in our world, they were simply humans (or perhaps also dwarfs, half dwarfs etc.) that had become involved in magic.

Many Hags served the Witch during the Age of Winter and the following Winter Revolution. Some of them helped bind Aslan to the Stone Table, and they likely fought during the First Battle of Beruna. After Aslan and the Narnians won the war, the Pevensies spent much of their reign hunting down and killing the Hags and other remnants of the White Witch's Army.

A few Hags must have survived the hunt, however, as centuries later, during the War of Deliverance, one Hag attempted to magically resurrect the ghost of Jadis with the help of a Werewolf. She was killed by Trumpkin just before she and the werewolf began to summon the Witch.

In the Disney films, Hags are portrayed as bird-faced creatures with talons. They are mostly bald, but with some feathers for hair.

In the 2005 film, four Hags appear at the Stone Table, where they are seen in corners tapping their sticks, as the Witch prepares to stab Aslan.

In the 2008 film, the Hag has Jadis' Wand, which is used to begin the ritual that can bring her back to life. Fortunately, she and the Werewolf are stopped by the Pevensies. She is killed when Peter throws her into a rock wall. 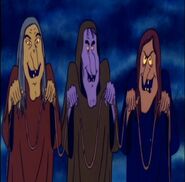 Hags in the animated feature.

A Hag, as seen in the 2005 film.
Community content is available under CC-BY-SA unless otherwise noted.