The Chronicles of Narnia Wiki
Register
Don't have an account?
Sign In
Advertisement
in: Fauns, Aslan's Army, The Lion, the Witch, and the Wardrobe,
and 2 more
English

Fauns were creatures that appeared part human and part goat, and which existed in the world of Narnia. They were some of Aslan's most trusted servants, who were loyal, noble and kind creatures.

They are described as being very short, with the upper body showing the appearance of a human, from the waist upwards, but with two horns on each side of their foreheads, and a reddish hue to their skin. Their lower bodies, however, show the appearance of a two-legged goat, with full furry legs, a tail, and cloven hooves. Fauns were similar in appearance to Satyrs, though Fauns had human faces rather than the Satyrs' goat faces. They enjoy dancing happily around bonfires with them, along with Dryads and Naiads, at night, and playing on their musical instruments, usually pipes, when they dance. Fauns also have a long life-span, but it is unknown exactly how long they live. However, the known life-span of centaurs is about two hundred years; so Fauns may be similar.

The Lion, the Witch, and the Wardrobe

Just before the beginning of the Winter Revolution, the first creature that Lucy Pevensie ever met in Narnia was a Faun named Mr. Tumnus. They met during the Long Winter that the White Witch had created for almost a hundred years. He tried to kidnap her, but Lucy reminded him that they were friends, so he brought her back to where they had met, to return her home. He was, however, later caught by Maugrim and the Secret Police, and was turned to stone by the White Witch for his disobedience. When Edmund entered the White Witch's Castle, he passed through a courtyard full of creatures, including Fauns that were turned to stone by the witch.

Fauns were later seen in Aslan's Camp, where they gathered around with the centaurs, satyrs, and various other Narnian creatures, when Peter, Susan, Lucy, He-Beaver and She-Beaver arrived to meet Aslan, the creator of Narnia. After the Long Winter, Fauns fought in Aslan's Army against the White Witch's Army in the First Battle of Beruna. They were also later present in the coronation at Cair Paravel, when the Pevensies became the new Kings and Queens of Narnia.

In the time of the Narnian Revolution, many Fauns gathered with the Old Narnians around the Dancing Lawn, when Prince Caspian came to speak with them all. They celebrated happily, and welcomed the young prince with open arms when he promised to help restore Narnia to them. They also allowed him to take part in their dance, as part of their celebration. They later fought in the Second Battle of Beruna against Miraz and the Telmarine army.

*In the Walden/Disney/Fox films, the Fauns appear almost exactly as they are described in the books, with the exception that their skin is not red, they have long goat-like ears, and have some fur down their arms. *In the 2010 Voyage of the Dawn Treader movie, there are two Fauns on the Dawn Treader's crew. One is named Nausus, while the other one (pictured) is called Randy. 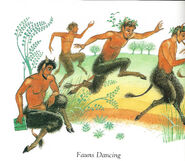 An illustration by Pauline Baynes depicting fauns dancing about. Taken from the book "A Book of Narnians". 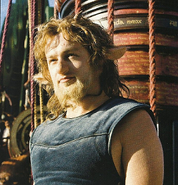 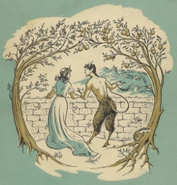 A group of Fauns befriend Caspian by allowing him to join in their dance.