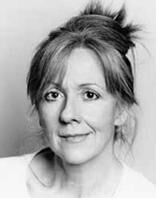 Elizabeth Ann "Liz" Crowther (born 9 December 1954) is an English actress. She portrayed Lucy Pevensie in the 1967 adaptation of The Lion, the Witch and the Wardrobe.

Born in Isleworth, then Middlesex, but now Greater London, England. She is the daughter of comedian Leslie Crowther.

She remains best known for her role as Sonia the receptionist in Shoestring. She has also appeared in Miss Marple, A Very Peculiar Practice, Bergerac, French Fields, Watching, Doctors and Outnumbered.

Crowther was also a regular cast member of the soap opera Family Affairs as Annie Hart from its debut in 1997 until 1999. She also played Sgt Jane Kendall in The Bill for nine months in 1993.

She played Tessa Waylund in the audio drama Something Inside based on the long-running British science fiction television series Doctor Who, produced by Big Finish Productions. In the 1980s, she supplied the voice for a few of British Rail's taped announcements at Clapham Junction station.

Retrieved from "https://narnia.fandom.com/wiki/Elizabeth_Crowther?oldid=38590"
Community content is available under CC-BY-SA unless otherwise noted.