The Chronicles of Narnia Wiki
Register
Don't have an account?
Sign In
Advertisement
in: Characters, Dwarfs, The Lion, the Witch, and the Wardrobe,
and 13 more
English

"Next moment (how those Dwarfs loved their work!) the fire was blazing, the bellows were roaring, the gold was melting, the hammers were clinking."
―Chapter fourteen: The Planting of the Tree[src]

Dwarfs were a race of humanoids in the world of Narnia.

Aslan created the first Dwarfs, along with Fauns, Satyrs, Dryads, and Naiads, at the same time he gave speech to the Talking Beasts. The Chief Dwarf (name unknown) was called to Aslan's council on the day of Narnia's birth.

Dwarfs also bore the train of King Frank, the first ruler of Narnia, at his coronation, and forged both his and his wife's crowns.

Many Dwarfs, especially Black Dwarfs (see Dwarf Ethnicities below), turned traitor and served the White Witch. The only such Dwarf whose name is recorded is Ginarrbrik.

Only a few Dwarfs--the ones least like humans in appearance, according to Mr. Beaver-- remained loyal to Aslan and Narnia, and the Witch had turned many of these loyal Dwarfs into stone.

These Dwarves later served Aslan in his army during the war with the Witch.

Although all of the Dwarfs fought on the side of the Old Narnians, several of the Black Dwarfs, especially Nikabrik, were tempted to turn to the White Witch's old allies--evil Hags, Werewolves and Ogres--for help.

Nikabrik, a Hag, and a Werewolf were killed in a skirmish with Caspian X and several others, after they tried to magically call up the White Witch.

Like most of the Narnians, the Dwarfs were originally taken in by the False Aslan and Shift's lies. However, when Tirian rescued a group of about thirty from their Calormene taskmasters and told them how they had been deceived, they refused to follow him, choosing instead to live only for themselves from then on.

In the Battle of Stable Hill, they shot both the Calormenes and the Narnians: they didn't want to follow Aslan, Tirian or the Tisroc, but to have Narnia for their own.

Of these thirty, only Poggin left the group to follow Tirian, and at least one of the other Dwarfs repented and came into Aslan's Country, even after participating in the murder of twenty Talking Horses. The other Dwarfs stayed for eternity in the outermost part of Aslan's Country, convinced they were in a lightless, smelly stable.

"They will not let us help them. They have chosen cunning instead of belief. Their prison is only in their own minds, yet they are in that prison; and so afraid of being taken in that they cannot be taken out."
―Aslan, describing the Dwarfs in Aslan's Country [src]

There were two different ethnicities of Narnian Dwarfs: Black Dwarfs and Red Dwarfs. The only significant physical difference between the two is the colour of their hair and beards. In temperament, Red Dwarfs were generally cheerful, while Black Dwarfs were often more sullen.

Both races were generally clever. They did not trust easily, but they were loyal once they did. All Narnian Dwarfs were excellent smiths, miners and archers. They could walk all day and night without rest, but all snored.

Renegade Dwarfs, or half-dwarfs, were descendants of Dwarfs who had escaped the massacre, following the Telmarine Conquest, which they did by shaving their beards, wearing high-heeled shoes, living with and eventually marrying humans.

They were despised by many of the pure Narnian Dwarfs, especially Black Dwarfs.

The Duffers, later known as Dufflepuds, lived on Coriakin's Island under the leadership of the Chief Duffer. Their appearance is largely unknown, although Coriakin described them as "common little dwarfs, nothing like so nice as the sort in Narnia."

The Duffers were not nearly so clever and solemn as their Narnian counterparts; they were known for such absurd deeds as planting boiled potatoes to save cooking them when they were dug up and washing the plates before dinner to save time afterward. The only Duffer whose name is recorded is Clipsie Duffer, the Chief Duffer's daughter. 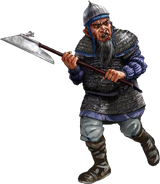 a red dwarf and a female dwarf in the witch's courtyard