The Chronicles of Narnia Wiki
Register
Don't have an account?
Sign In
Advertisement
in: Pages with reference errors, Invented for Film, Animals,
and 18 more

"Be still, my princes, I bring grave news from your sisters."
―A Blossom Dryad speaks to Peter and Edmund Pevensie[src]

Dryads were nature spirits closely associated with trees and woodlands. During the Creation of Narnia, they came into being shortly after the Talking Beasts, and remained prominent in the country throughout its history.

A number of different words were used to refer to Narnian tree spirits: In addition to "dryads", other terms included "wood nymphs", "wood gods/goddesses",[1] "hamadryads", "tree people", "silvans", or simply "trees"[2]. Although these terms were sometimes used interchangeably, the appearances and nature of tree spirits varied quite widely, so it was not always clear which individuals belonged to which category (if there was any major division of categories at all). They also looked like dust when they were doing metamorphosis.

Descriptions included spirits who looked more or less humanoid and were connected to individual trees, but also ones who were like living, moving trees themselves, with roots and branches functioning as limbs. While there were apparently both male and female dryads, the females seemed to be more numerous/prominent (if only because they appeared more frequently).

After Aslan gave certain animals the gift to speech, he declared to the Narnian creatures; “Be walking trees. Be talking beasts. Be divine waters”. At this command, wood gods and goddesses came out of the trees[1] (though it was not specified if they came out of the trees themselves, or simply out from amongst them). Aslan summoned an oak tree to be a member of his first council.[1]

In later years, some of the female descendants of King Frank and Queen Helen took wood gods as husbands.[3]

The Lion, the Witch, and the Wardrobe

"The woods are full of her spies, even some of the trees are on her side."
―Mr. Tumnus warning Lucy Pevensie about the Dryads that work for Jadis.[src]

Mr. Tumnus recounted to Lucy that dryads were among the participants in the nighttime festivals held in Narnia before the usurpation by the White Witch. He also mentioned that some trees were on the Witch's side and worked as her spies,[4] a point reiterated by Mr. Beaver.[5]

Female tree spirits were among the victims turned into stone by the White Witch and kept in her castle courtyard:[2] These included birch-girls dressed in silver, beech-girls in transparent green, and larch-girls in bright yellow-green (all were later released by Aslan).[6]

Dryads were present at Aslan's camp and served as harpists along with Naiads. Both were later seen running away in fear when the wolf Maugrim came into the camp in an attempt to kill the Pevensies.[7]

When her other wolf brought the news that Maugrim had been killed and urged her to retreat, the Witch refused and ordered him to summon all the creatures on their side, including the spirits of the trees.[8] These evil tree spirits were later present during the sacrifice of Aslan on the Stone Table.[9]

During their reign, the Pevensies enacted laws that prevented good trees from being unnecessarily cut down.[10]

The Horse and his Boy

While in Tashbaan, Tumnus reminded Shasta (whom he believed to be Prince Corin) that he had promised to come and stay with Tumnus for a week during the Summer Festival in Narnia, where there would be all-night dances with the fauns and dryads.[11]

When the Pevensies were called back to Narnia by Susan’s horn, they stumbled across a ruined castle surrounded by an orchard. They eventually realized that the ruins were those of Cair Paravel, and the orchard was in fact the one they planted during their reign. Peter recalled that Pomona, the greatest of the wood people, placed spells on the orchard to ensure its success.[12]

When he was young, Caspian’s nurse told him many stories of Narnia before the Telmarines arrived, including tales of dryads. Both Doctor Cornelius and Trufflehunter the badger said that the Telmarine invasion had effectively silenced the trees,[11] causing the dryads to fall into deep hibernation for their own survival. They had apparently been asleep for so long that even other Narnians, such as Trumpkin the dwarf, believed them to have never been alive at all.[13]

On their journey to Aslan's How , Trumpkin and the Pevensies stopped for the night by Glasswater Creek, and Lucy went exploring amongst the trees. She felt as if the whole forest were coming awake, and could imagine how each kind of tree would look like in human form – silver birch trees as slender girls with soft, showery voices; oak trees as wizened, hearty old men with beards and hairy warts; and beech trees elegant and stately like goddesses. Lucy tried to speak to the trees and awaken then, but heard only rustling amongst the leaves.[14] During a later stop on their journey, Lucy was awakened by a voice calling to her, and as she walked towards the source of the voice – which turned out to be Aslan - she saw the trees moving and dancing sleepily, shifting back and forth between tree-like to human-like form. One of them reminded her of a huge man with a shaggy beard and bushy hair. They were nearly awake, but not fully. As Lucy and Aslan passed back through the trees, the momentarily assumed their full human form and bowed to Him.[15]

Later, after dispatching Peter, Edmund, and Trumpkin into Caspian's camp, Aslan let out an enormous roar that was heard all throughout Narnia and fully awakened the trees. By the time they had all gathered around Aslan, Susan, and Lucy, they had assumed human forms: “Pale birch girls were tossing their heads, willow women pushed back their hair from their brooding faces to gaze on Aslan, the queenly beeches stood still and adored him, shaggy oak-men, lean and melancholy elms, shock-headed hollies (dark themselves, but their wives all bright with berries) and gay rowans, all bowed and rose again, shouting ‘Aslan! Aslan!’ in their various husky or creaking or wave-like voices.”[16]

The next day they set off to Aslan's How, and during the battle that ensued, they swooped in on the Telmarines, using the branches and roots of their trees to swing them around, strangle them, and destroy their weapons. During the celebration of the Old Narnians victory, different types of soils were dug up for them to eat. Some Holly dryads were mentioned drinking wine, and they became very chatty.

Reepicheep told of a dryad singing to him while he was still in his cradle. The song concerned the lands of the Utter East, and it was this song that first spurred his desire to attempt travel to Aslan's Country.

A dryad maiden with willowy-looking hair was mentioned looking after Jill during her stay at Cair Paravel. After Jill, Eustace, Puddleglum and Rilian escaped the Underland, dryads were seen performing the Snow Dance with fauns, dwarfs and other woodland animals.

A beech dryad left her tree and warned King Tirian of how the trees in Lantern Waste were being felled by Calormene, and the dryads were being slain. She then fell down, died, and vanished into thin air because her tree had been chopped down.

In the films by Disney/Walden Media, dryads are largely portrayed as non-physical spirits who use their leaves and petals to form humanoid bodies. When portrayed in their trees forms, they do not take on humanoid features (except for one moment when a tree is killed with a boulder, and it makes the face of a person crying out in agony within its foliage). In their tree forms, they also have the ability to extend their roots like powerful tentacles, which they used in battle against the Telmarines.

A blossom dryad and a green dryad - type of tree unclear - greeted Lucy upon her arrival at Aslan's Camp. Following Aslan's sacrifice at the Stone Table, a blossom dryad (unknown if the same one) carried news of His death from Lucy and Susan to Peter and Edmund.

While the party rests on their way to meet Caspian, Lucy dreams of moving trees and sees a blossom dryad floating on the wind. After she encounters Aslan and he finally awakens the trees from their slumber, their come to the aid of the Old Narnians, playing decisive role in turning the tide of battle against the Telmarines. 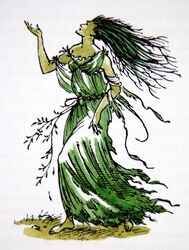 A dying beech dryad comes to warn Tirian of the Calormenes slaughtering her people's trees.

A dryad playing a harp.

A happy dryad in nymph form.

A dryad in tree-ish form.

A dryad in tree-like form.

Lucy is greeted by two dryads.

A dryad tells Peter and Edmund of Aslan's death. 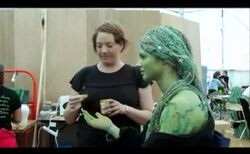 An actress in a dryad costume, as was intended for the coronation scene. 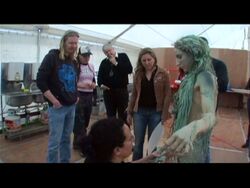 An actress in dryad costume with Andrew Adamson and Isis Mussenden. 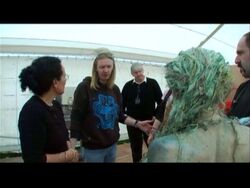 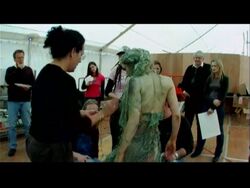 Isis Mussenden working on an actress in a dryad costume. 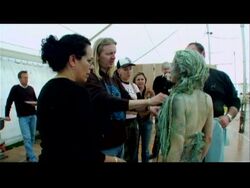 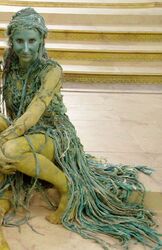 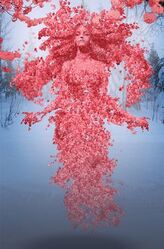 A dryad aids the Old Narnians by using it's tree. 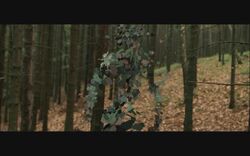