Doorn was the largest and most populated of the Lone Islands (the others being Felimath and Avra).

Narrowhaven, the capital of the Islands, was situated there.

During the days of Governor Gumpas, Narnian influence had so declined that courtesy and cleanliness were almost unheard of on the island.

Slavery was also common. Caspian X, Edmund, Lucy, Eustace and Reepicheep were captured by the slave-trader Pug and his men on the island of Felimath, and taken to Narrowhaven on Doorn to be sold. 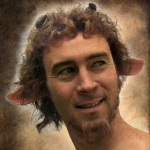