The Chronicles of Narnia Wiki
Register
Don't have an account?
Sign In
Advertisement
in: Characters, Seven Friends of Narnia, The Lion, the Witch, and the Wardrobe,
and 5 more
English

The Magician's Nephew
The Lion, the Witch and the Wardrobe
The Last Battle

"Why don't they teach logic at these schools?"
―Digory Kirke [src]

Professor Digory Kirke (1888–1949) was a man from London who had travelled to Narnia during his childhood. He was notable for being a famous learned man, a great traveller, and - out of the Friends of Narnia - one of the only two who witnessed both the creation and destruction of Narnia.

Digory was born as the only son of presumably wealthy parents - he once revealed that he had lived "all his life" in the country, had his own pony, and there was a river at the bottom of his home's garden.

Unfortunately, his mother, Mabel, later became ill with a chronic disease, and as his father had to go to India for work, Digory and Mabel had to move in with his Aunt Letty and Uncle Andrew (his mother's siblings), who lived in London, England. However, Digory hated it there, especially since Mabel seemed certain to die of her illness. In the midst of this, he managed to befriend a young girl named Polly Plummer, which led to his first trip to Narnia.

The Creation of Narnia

As a young boy, Digory and Polly first visited Narnia by use of the magic rings. Digory's Uncle Andrew made sets of rings that allowed their wearers to travel to other worlds (of completely different universes) by first passing through the Wood Between the Worlds.

Uncle Andrew tricked Polly into trying a ring, then when she disappeared, he blackmailed Digory into going after her. After passing through the Wood Between the Worlds and finding Polly, they decided to jump into a pool at random, after first marking the pool that would lead them home.

The one that they chose led to a world called Charn, which had long since been destroyed of all life, save one.

Digory unwittingly broke an enchantment, by ringing a small bell, which accidentally released Charn's former Empress, and its destroyer, Jadis (who later became known as the White Witch).

After they released her, they tried to escape, but she followed the children back into the Wood. Though she was weak there, the Empress managed to arrive with Digory and Polly back in London.

Jadis caused a good deal of commotion in the city before Digory, Polly, Andrew and Jadis, along with a cab driver and his horse, were transported to the newly born world of Narnia.

Because Digory had been the one who had brought Jadis, a great evil, into Narnia on the day of its birth, the world's creator, Aslan, sent him on a journey to help protect the land from her. He was sent to find an apple from a sacred tree, which would protect Narnia for centuries to come (exactly 898 years).

Upon his arrival at the Garden of Youth, he found that Jadis had followed him there, and had already eaten one of the trees' fruits, thus making herself immortal. She tried to persuade him to not plant the tree that would lead to her banishment; first by encouraging him to eat the fruit himself, telling him that it would grant him eternal life as well as endless youth, and they could control Narnia together. Second, to give the fruit to his dying mother instead, assuring him that it would cure her of her illness.

Fortunately, Digory was able to resist both temptations, and even rebuffed her angrily. After his refusal, Jadis immediately set out toward the north, far from Narnia.

After he returned with the apple, Digory planted it, and it and grew into a magical tree called The Tree of Protection.

For his courage and his successful resistance towards of Jadis' temptations, Aslan gave Digory a piece of the fruit from the first tree to take back with him to Earth for his bedridden mother. Just like how Aslan had promised, the fruit healed his mother her of her illness, and she lived to a ripe old age.

When the fruit was eaten to its core, Digory took the core and planted it in his yard. The tree grew just as well as its sister tree in Narnia, and seemed to have a link to the other tree - it sometimes moved when there was no wind...at least not in London. The tree was eventually blown down and its wood was used to build a wonderful Wardrobe.

Decades later, when Digory had become known as Professor Kirke, his wardrobe became the door by which Lucy, Edmund, Peter and Susan Pevensie made their first journey into Narnia.

When Lucy told the others about her visit to Narnia, Digory was quick to believe her - perhaps recalling his own trip to that world - and after an argument with Lucy over Narnia's existence, which disturbed Mrs. Macready, he persuaded Peter and Susan to believe that Lucy was telling the truth. The Tree of Protection had by then long since been destroyed, giving Jadis free reign over the world, until the Pevensies helped to vanquish her.

Some time later, Professor Kirke moved from his large country estate to a very small home, where he tutored Peter Pevensie. Periodically, the three younger ones (Susan, it was said, no longer believed in Narnia), along with their cousin Eustace Scrubb, Jill Pole and Polly, would get together to talk about their adventures in Narnia. It was at a time such as this that Tirian, the current king of Narnia, came to them like a ghost to ask for help.

Feeling that the spectre they had seen was surely Narnian, the six of them knew they had to find a way to get back. Digory suggested that the only way was to use the rings his uncle made years ago. Peter and Edmund were tasked to retrieve the rings while the other four took a trip by train to meet them. However, this led to the railway accident, which took the lives of all six. They did not know that they were dead, for they woke up, as it were, in Narnia.

As the final battle came to its conclusion, bringing with it the destruction of the Shadowlands and the reunion of all good Narnians in the true Narnia, Digory and the other Friends would live forever in Aslan's Country with him.

"It's all in Plato, all in Plato: bless me, what do they teach them at these schools!"
―Digory about Aslan's Country and the Shadowlands[src]

1979 animated version of "The Lion, the Witch and the Wardrobe", where Digory was voiced by Leo McKern. 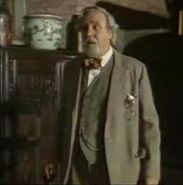 Michael Aldridge as Digory in the 1988 BBC miniseries adaptation of The Lion, the Witch and the Wardrobe

In the 2005 Disney film, Digory was portrayed by Jim Broadbent.
Deutsch Français Русский
Community content is available under CC-BY-SA unless otherwise noted.
Advertisement