"Perhaps you haven't seen any Centaurs yet? There were some in the battle yesterday. Most remarkable people, but I can't say I feel quite at home with them yet."
―The Horse and His Boy - (Cor, Chapter fourteen: How Bree Became a Wiser Horse)

Centaurs were a race of highly intelligent, loyal and honourable creatures that existed in Narnia.

They appeared human from the abdomen up to the head, while the rest of their body was that of a horse. The horse part of them was described as resembling that of a huge English farm horse, and the human part like stern but beautiful giants.

Centaurs were often prophets and stargazers, like Glenstorm, or healers like the Centaur Cloudbirth. All of them were warriors, who fought for Narnia and Aslan in every major battle and war.

Centaurs had long life-spans, some living up to two hundred years. They were the only race that could interpret the dance of the Stars, which gave them foresight into certain events of the future, hence they were known for waking up before it gets light. They were great warriors, and were known to be among the most important soldiers in Aslan's Army.

Oaten cakes, apples, herbs, wine, and cheese formed the staple of a Centaur's diet. Centaurs had two stomachs, one of a horse and one of a man, so they had to fill both of these stomachs, making inviting a Centaur over for the week-end a serious thing. Their breakfast might include porridge, pavendors, kidneys, bacon, an omelette, cold ham, toast, marmalade, coffee and beer. They then graze for an hour before eating hot mash, some oats and a bag of sugar.

Centaurs were considered excellent strategists, and were most likely to be good at knowing how to kill someone who was riding on a horse.

No one would dare laugh at a Centaur, and no one who valued his life would dare try to put a saddle on one.

Out of all the creatures of Narnia, they were the most respected. So much so that even the king and queen of Archenland came all the way personally from their country so that one of them could bless their newborn sons.

The Chronicles of Narnia (film series)

The Centaurs were part of every army in Narnia that was dedicated to Aslan and Narnia's freedom, from Aslan's Army that fought against the White Witch in The Lion, the Witch and the Wardrobe (Disney movie), to the Old Narnians who fought against the Telmarines in Prince Caspian (Film).

In both armies, there was at least one Centaur who served as the General. During the Winter Revolution, Aslan's general was the Centaur Oreius, and during the Narnian Revolution, Caspian X had one named Glenstorm as his.

One of Glenstorm's own sons sacrificed himself in the Telmarine Castle Night Raid when he became trapped within the castle courtyard, and was slaughtered with the rest. Instead of being afraid, though, he was more concerned about everyone else escaping, giving a perfect example of a Centaur's bravery and courage.

There were no female Centaurs mentioned in the books, but they did star in the Disney adaptions. They were sometimes called Centauresses, and have been depicted to be great archers.

In the films, the human face of a Centaur is slightly more horse-like, with long horse's ears, sometimes no eyebrows, and bigger noses.

Centaurs look exactly as they are described in traditional myths, and fight on the side of Aslan, in the animated adaption of The Lion, the Witch and the Wardrobe.

There were no named Centaurs in the film, but a few had some lines, including one who shouted his anger at losing the Witch when she disappeared after he and several other Narnians rescued Edmund from her, and another who allowed Edmund to ride him while they escaped.

At the end of the film, two Centaurs were stationed outside Cair Paravel as sentry guards.

A Centaur, as drawn by Pauline Baynes. 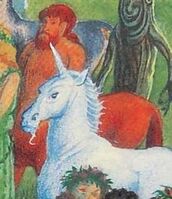 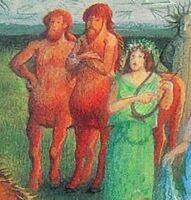 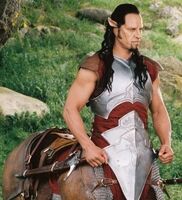 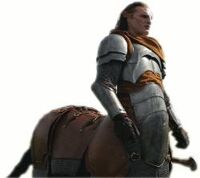 Archer Centauress in the First Battle of Beruna. 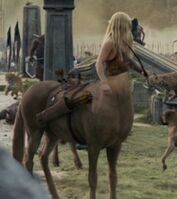 Centauress from the Prince Caspian game. 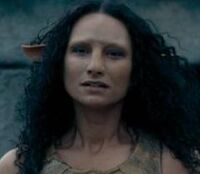 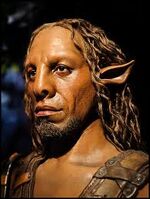 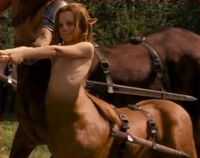 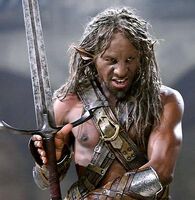 Centaur's of Aslan's Army charging the forces of the The White Witch. 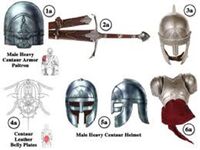 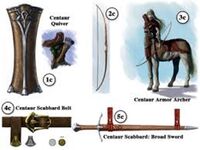 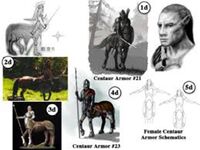 The anatomy of a Centaur.
Add a photo to this gallery 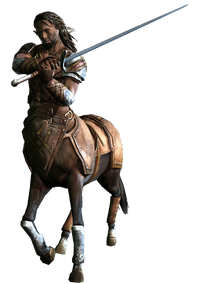 Retrieved from "https://narnia.fandom.com/wiki/Centaur?oldid=52396"
Community content is available under CC-BY-SA unless otherwise noted.