The Chronicles of Narnia Wiki
Register
Don't have an account?
Sign In
Advertisement
in: Animals, Aslan's Army, The Lion, the Witch, and the Wardrobe,
and 6 more

Cats were aloof, intelligent mammals that live in the world of Narnia and Earth.

They maintain a strict sense of decorum amongst themselves, and are always prim and proper. They are also a bit condescending to others who aren't the same, but are very self-assured, as it takes a very great deal to rattle a cat's nerves.

Cats can also be seen in any different color and sizes.

In The Magician's Nephew, two cats were mentioned when they came out of the ground after the world of Narnia was created.

In The Last Battle, one cat named Ginger was interested with Shift's fake story about Aslan as Tash, and Tash as Aslan, for the combination as "Tashlan". Ginger agreed to assist Shift, in order to allow every Narnian to believe in this false story about Tashlan, after the Calormenes invaded the land of Narnia. Ginger was the first one to enter the stable, as part of Shift's ruse. It backfired when Ginger found the real Tash in the stable. Tash attacked Ginger, causing him to run out of the stable with a shriek and then, to the shock of the Narnian beasts, revert to a dumb beast. He climbed up a tree, and was never seen again. 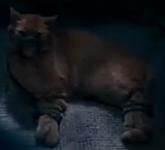 In the Prince Caspian (Disney movie), while during the Attack on Miraz's Castle, Reepicheep and his fellow mice had infiltrated the tower, so as to secure the controls for the drawbridge, which they could then lower down to allow the other Narnians to enter. While they were there, they came upon a sleeping cat (presumably an ordinary non-talking one). Reepicheep ordered his mice to fall back, while he had a mischievous look on his own face.

They ended up binding and gagging the cat, similar to the way that Aslan was bound on the Stone Table at his sacrifice.

Other Species of Cats