"Why is it called Aslan's table?"
"It is set here by his bidding for those who have come so far. Some call this island the World's End, for though you can sail further, this is the beginning of the end."
―Lucy Pevensie and Ramandu's Daughter[src]

Aslan's Table was, as it says, the table of Aslan himself, which was located near the end of the Narnia world.

It was a long table, which was to be found on Ramandu's Island. It was set there at Aslan's bidding, for travellers who had travelled so far.

It was covered with delicious food and drink, which the Sun-birds came and ate every morning. The food was then magically replenished before the evening.

Also set on the table was the White Witch's Stone Knife, which the White Witch had used to kill Aslan during the Winter Revolution, on the Stone Table.

It had been placed there centuries ago, presumably by Aslan, and was considered a holy relic.

No one was allowed to touch it.

The remaining three of the Seven lost Lords (Mavramorn, Revilian and Argoz) (great Telmarine lords, who had been on a voyage of explaration) had arrived at Ramandu's Island and had sat down to eat and drink, when they fell into an argument about what they should do next.

One of them wanted to carry on sailing East, and so continue exploring, another wanted to stay on Ramandu's Island and eat the food every day, and the other wanted to set sail for Narnia and go back the way they had come. 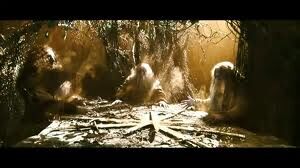 One of them picked up the knife of stone, and would have fought with his comrades, but the knife was not a thing that he should have touched, and deep sleep fell upon all three.

When Caspian X, along with the rest of the crew of the Dawn Treader (they had also been on a voyage of exploration) came to Ramandu's Island. they found the three lords fast asleep.

When the crew of the Dawn Treader arrived back at Ramandu's Island they found the three lords awake.

Retrieved from "https://narnia.fandom.com/wiki/Aslan%27s_Table?oldid=50793"
Community content is available under CC-BY-SA unless otherwise noted.