The Age of Conquest was the earliest period of Narnian history that lasted for nine hundred Narnian years, beginning when Narnia was created by Aslan from its solid "dark and stillness". At the beginning of the Age Aslan and his father held a meeting at the Stone Table with the Narnian council to introduce them to the laws of the country. The Age lasted from the year 1 to 900. Through most of this era, Narnia and her allies were guarded by the Tree of Protection from Jadis and her slowly growing army, who resided in the Witch Country. Sometime during this age, both the Ettins and Giants became civilised and intelligent species, which resulted in the creation of an empire in Ettinsmoor and the Wild Lands of the North. 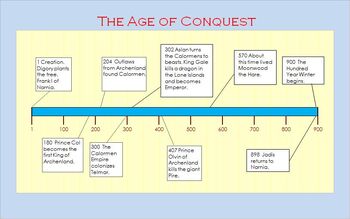 It was during this era that Archenland, Galma, Terebinthia, the Seven Isles, the Lone Islands and the Merpeople's sea nation were formed and became allies or territories of Narnia, ergo the Narnian Empire was formed.

Time after time during this era, Aslan would appear in Narnia at the Stone Table to advise Narnians threatened by various evils (unaffiliated with Jadis). However, in the Narnian year 896, the ancient tree of protection was blown down during a violent storm, fulfilling the prophecy Aslan spoke at the tree's planting on the day of Narnia's creation. The wind blew from the northwest and was unusually powerful, leading some of the wiser creatures in Narnia to wonder whether it had been supernaturally contrived by the mysterious sorceress Jadis, who had a sinister reputation in Narnian folklore.

Narnia's worst fears were realised two years after the tree's death, when Jadis invaded Narnia from the north west with an army of evil creatures from which was the Witch Country, which lay north of the Western Wild and Telmar, south of the Unnamed Tundra, east of the Western Sea, and west of the Wild Lands of the North. Aslan did not yet come to the aid of the Narnians, who were forced to fend for themselves. Against hope, the Narnian king led an army of men, talking beasts, dwarves, centaurs, and good giants against Jadis. Despite the courage of the Narnians, they were defeated mainly because of Jadis's extremely powerful dark magic. Mortally wounded, the King sent a message to Cair Paravel with instructions to send members of the royal family and court into hiding in Archenland.

Having defeated the army of Narnia, Jadis turned her attention upon Narnia's capital, and found it largely abandoned except for a skeleton force of soldiers who put up a brave defence but were soon defeated. Some of the refugees who had been warned to flee the capital were intercepted—among them the King's sons—and were killed. Jadis assumed rulership of Narnia and became known as the White Witch.

For a while, there was resistance to the Witch's rule. Surviving humans from the Narnian royal court were sheltered in the royal house of Archenland; talking beasts were assisted by hired men from Archenland in prolonging the struggle. However, Jadis won over many of Narnia's dwarves and darker creatures to her side and the resistance fighters were heavily outnumbered. Eventually, two years after the conquest in 900, Jadis had consolidated her strength and had magically changed the climate of the land. Heavy snow and blizzards made the mountain pass to Archenland treacherous, and Narnia became geographically isolated. Jadis's intricate spy network guarded the Narnian borders to ensure that no human being from Archenland or beyond ever entered her realm unchecked. The Hundred Year Winter commenced.

Retrieved from "https://narnia.fandom.com/wiki/Age_of_Conquest?oldid=52618"
Community content is available under CC-BY-SA unless otherwise noted.